Runway For The Few 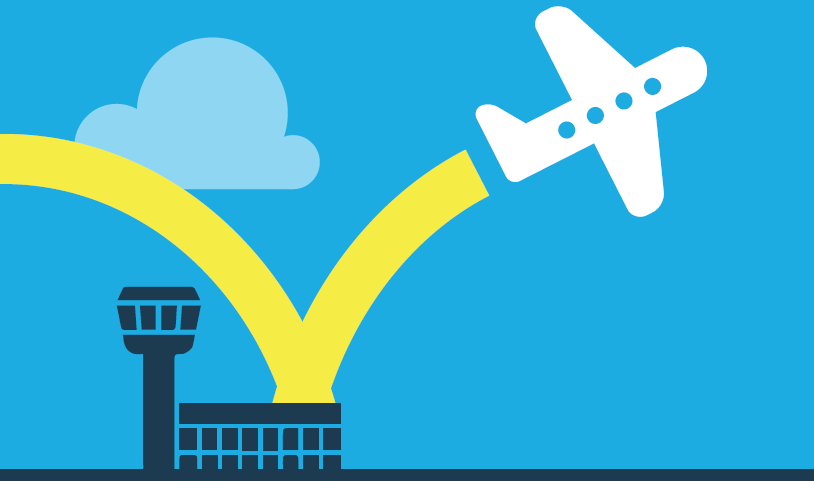 With a vote on the expansion of Heathrow Airport in the House of Commons looming today, a new report from Fellow Travellers (and co-authored by myself), Runway For The Few, has been published which casts a critical eye over the justifications used by the government and Heathrow Airport in support of construction of a third runway.

In Runway For The Few we have taken a deep dive into data published by the UK Civil Aviation Authority and Department for Transport to pull together a comprehensive picture of passenger trends at Heathrow and the three other major London airports (Gatwick, Stansted and Luton) since 2000. This data paints a picture which is perhaps surprising to many who have heard the arguments cited in support of Heathrow expansion.

Heathrow makes a lot of noise about its role in supporting UK businesses and expanding trade to emerging markets, but the passenger numbers tell a very different story. Both UK and foreign business passengers flying to or from the UK have been in decline since 2000 as during this period communications technologies have emerged that massively reduce the need to fly staff around the world to conduct business: 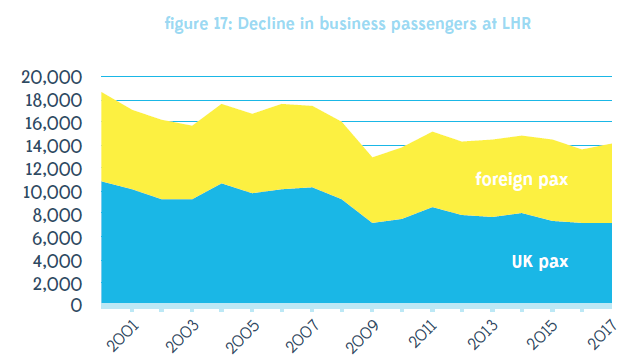 Heathrow also trumpets its role in the domestic air travel market but domestic passengers are down more than 50% since 2000: 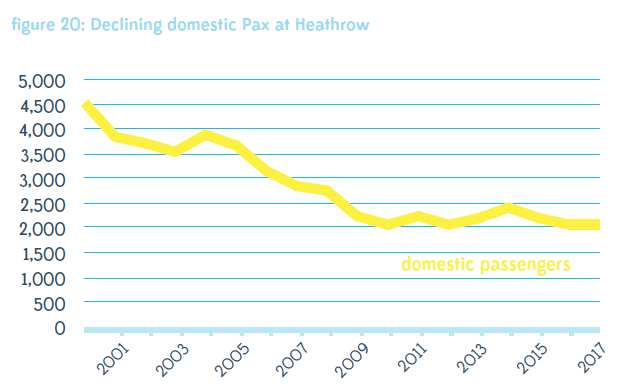 With the Climate Change Act mandating big reductions in UK emissions and very convenient alternatives to flying available, in a sane world this is exactly the sort of trend that the government would be using to demonstrate their pro-environmental credentials to the world. Instead the government has taken the extraordinary decision of announcing that they will adopt a protectionist approach and reserve slots for regional airports at an expanded Heathrow, rather than letting the market decide. 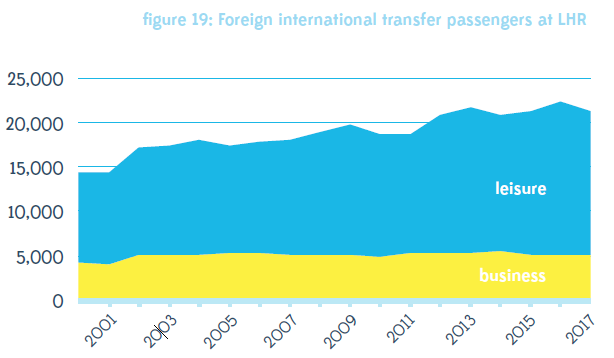 Both UK and foreign passenger numbers flying into or out of the UK have been growing rapidly (from 25 million in total in 2000 to over 35 million in 2017) and this growth appears to be accelerating in recent years: 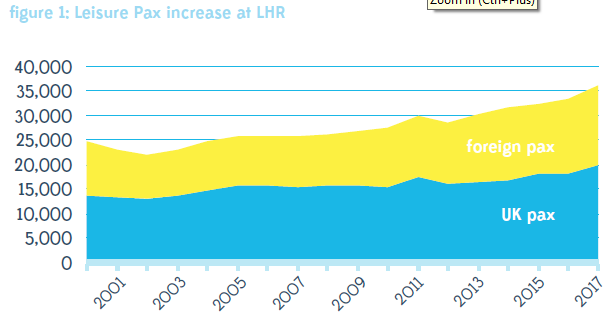 And who are these passengers? Around half of the UK population doesn’t fly in any given year. If you are in the poorest 20% of the population then only 30% fly. Flying is heavily dominated by the most affluent in the UK flying multiple times per year, as this very revealing chart, which was produced using data from the Department for Transport’s National Travel Survey, clearly demonstrates: 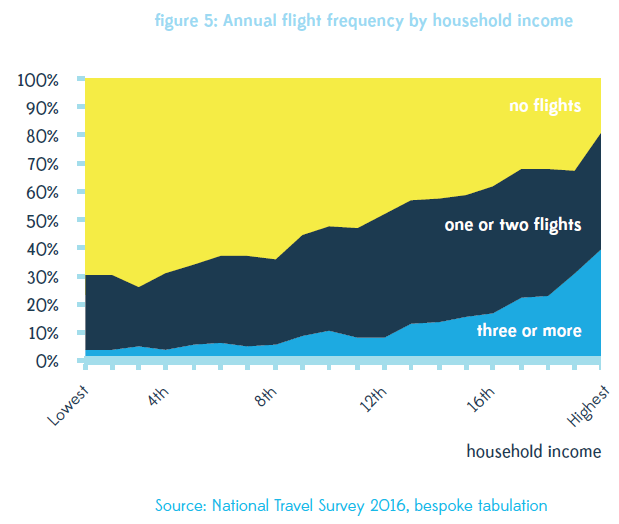 As Richard Black observed in New Scientist in 2016, the aviation industry appears to be protected by a Somebody-Else’s-Problem field from The Hitchhiker’s Guide To The Galaxy. The description is apt: an SEP field is a cloaking device which “utilises a person’s natural tendency to ignore things they don’t easily accept”, rendering the object invisible.

An enormous, collective blind spot has built up around aviation (which is already possibly the most protected and cossetted industry on the planet), leading to a widespread belief that it must expand. This expansion is going to primarily benefit a small and wealthy section of society while imposing enormous, externalised environmental impacts on everyone.

There appears to be a lot of wishful thinking going on that some technology will appear and fix the aviation emission problem so that we can carry on flying more and more, but there is precious little evidence that this is going to happen.

Please take the time to read the report. It contains lots of other ineresting data on passenger numbers and frequent flying. Also if you have any questions about the report or the data that underpins it, feel free to post a comment below.